The following STSMs have been approved to receive support from the Horizon 2020 Framework Programme of the European Union, through COST Action CA18222 funds (for a wider description, follow the links below or take a look to the News section ‘STSM results’).

Due to their biological relevance, DNA nucleobases excited state dynamics is extensively examined both experimentally and theoretically. Understanding competing photophysical mechanisms that can lead to and prevent light-inducted damage of the DNA nucleobases is of interest because of their widespread potential biological and/or technological applications. Determination of the character of large number of the excited electronic states is a challenging problem for nucleobases and other polyatomic molecules in general. Thus, resolving this problem is one step forward in understanding physical consequences underlying electronic excitation for these systems. Using previously developed procedure (Phys. Chem. Chem. Phys. 2019, 21, 22782) we are able to automatically determine character of the excited electronic states of nucleobase uracil both in gas phase and aqueous solution.

This procedure informs us about: theoretical assignment of the electronic spectra; state specific analysis of solvation effects; effects of vibrational averaging, temperature and solvent-induced structural changes; state specific solvent shifts for the solvent sensitive nπ* electronic states. Electronic absorption spectra profiles are calculated and general remarks can be drawn: (1) vibrational averaging and temperature increase produce comparable effects on all examined excited states energetically stabilizing them; (2) bright electronic states (ππ* states) contributing to spectral profile are stabilized by the introduction of electrostatic effects while dark (nπ* states) are strongly destabilized; (3) apparent stabilization of the bright electronic states is present when introducing solvent effects while this effects are rather complex in the case of dark and delocalized states (Rydberg transitions).

Acquired data should provide more convenient insights into absorption spectra of the uracil and therefore foundation for studying photodynamics of uracil in aqueous solution and the possibility of the excited state driven N-H bond fission. Hopefully, detailed characterization of the electronic states involved in the relaxation of gas phase and aqueous uracil structures will shed new light on the active role of the chemical environment in the exited state deactivation events of nucleobases.

The objective of this STSM was to device a code that would retrieve the ultra fast dynamical information after ionisation of molecules subject to ultrafast laser fields. The process of inonisation can result in attosecond resolved spectroscopy such as High Harmonic Generation. Here the electron of the ion recombines with itself after ionization thus releasing a XUV photon. Recreating harmonic spectra will be the main application of the code.

Molecules are composed of nuclei and electrons which form chemical bonds. Their motions are as fast as 10-15 and 10-18 seconds, respectively, and govern the outcome of chemical reactions. In order to observe these ultrafast processes, we thus need very special and powerful tools. In particular, X-ray Free Electron Lasers (XFELs) are able to generate highly intense ultrashort X-ray pulses – or bursts of light – by accelerating electrons up to relativistic speed and sending them through a sequence of magnets. To probe in real time the electron and nuclear rearrangements, pulse duration should be in the same order or shorter than these motions. In addition to this extremely high temporal resolution, X-ray pulses offer atomic spatial resolution, which allows us to trigger and probe the dynamics at a particular site in the molecule. X-rays interact primarily with core electrons which are deeply localized close to the nuclei. The binding energy of these electrons is specific of the element, such that we can control which atom is ionized in the molecule by varying the energy of the X-ray photon. Moreover, the binding energy of core electrons is sensitive to the local chemical environment. The X-ray Pholoelectron Spectroscopy (XPS) technique exploits this property: by measuring the energy of the electron ejected from the molecule by the X-ray, we can observe the local electron redistribution and changes in nuclear geometry while the chemical reaction takes place.

In this project, we studied the dynamics taking place in cationic states of a molecule using a time-resolved XPS. In this way, we are able to grab a ‘movie’ of the coupled electron and nuclear dynamics. In order to simulate the processes in play, we use a surface-hopping semiclassical propagation scheme1, in which the electron motion is treated quantum mechanically, while the nuclear dynamics is performed classically using a swarm of independent trajectories. These simulations are very expensive and may be hard to converge. To overcome this limitation, we started to supplement the propagation code with a Deep-Learning algorithm to accelerate the calculations and made it suitable for the treatment of larger molecules. Deep-Learning models are based on Neural Networks which are biology-inspired statistical algorithms. We believe that the use of Artificial Intelligence-based methods coupled to traditional quantum/semi-classical algorithms is a promising avenue for studying ultrafast phenomena in complex systems, and more generally to investigate the fundamental properties of matter.

Femtochemistry opened the possibility of studying molecular motion using ultra-short (10⁻1515s) laser pulses. Such studies enable the comprehension of the relative atomic rearrangement during chemical reactions. Attophysics, as a natural continuation of femtochemistry, aims to unravel the electron motion within atoms and molecules by using attosecond (10-18s) laser pulses of coherent extreme ultraviolet (XUV) radiation. Attosecond transient absorption spectroscopy (ATAS) can be used to study electron coherence and motion in atoms. In a typical ATAS scenario, an intense laser field is use to prepare an electron wave packet in a specific state of the target system, while an
XUV pulse is used to probe the dynamics. By varying the time delay between pulses, timedependent light-matter interaction phenomena can be explored.
Du to the complexity of electron dynamics, the development of theoretical methods are crucial to understand the results obtained experimentally. All theoretical studies so far are based on nonrelativistic ATAS theory. Nevertheless, these theories are not sufficient to properly describe phenomena such as the spin-orbit coupling. The importance of the spin–orbit coupling was demonstrated by the first ATAS experiment, which targeted krypton.
The recent theoretical developments carried out in our group at Lund University based on the relativistic time-dependent Dirac equation allows us to describe spin-orbit coupling beyond the simplistic but well established “few states models”.
Prof. Fernando Martin’s group expertise on ATAS, together with the novel theoretical methods developed in Lund, allow us to simulate spin-orbit resolved attosecond transient absorption spectra. Figure 1 contains the preliminary ATAS investigation of the 2s22p6-2s2p6np autoionization series in neon calculated with the relativistic time-dependent configuration interaction singles method.

There has been a long-standing effort to investigate building blocks of biological macromolecules by spectroscopic techniques based on synchrotron radiation, such as photoelectron spectroscopy (PES), near-edge X-ray absorption fine structure (NEXAFS) and photoelectron-photoion coincidence (PEPICO). Unfortunately, the studies on small building blocks often cannot be directly extrapolated to the macromolecules that they form. For example, the electronic structure of polypeptides (proteins) is strongly influenced by peptide bonds that link the constituent amino acids. Nevertheless, producing large and fragile biomolecules, such as proteins and oligonucleotides (DNA strands), isolated under high vacuum conditions in order to perform spectroscopic techniques is experimentally challenging.

The scientists of the host institute at the PLEIADES beamline are currently developing a new custom-made apparatus to perform photoelectron-photoion coincidence experiments of electrosprayed biomolecular ions. Briefly, the new PLEAIDES instrument consists of an atmospheric pressure ESI source, a double radiofrequency ion-funnel and a rectilinear quadrupole ion guide. The ions delivered by the source are further transferred and refocused into the interaction region inside the EPICEA vacuum chamber by a custom-made system of lenses and deflectors hosted inside a differentially pumped chamber, designed and built on PLEAIDES. In the interaction region, the ion beam crossed orthogonally the photon beam from the synchrotron beamline.

During this STSM, we have thoroughly assessed all aspects of this new instrument, from optimizing the production and transmission of electrosprayed biomolecular ions, to testing several configurations of synchronous timing for pulsing the ion beam and the spectrometer electrodes’ voltage. The work achieved during the STSM paves the way for the future improvement of the setup which should give its first results this year. 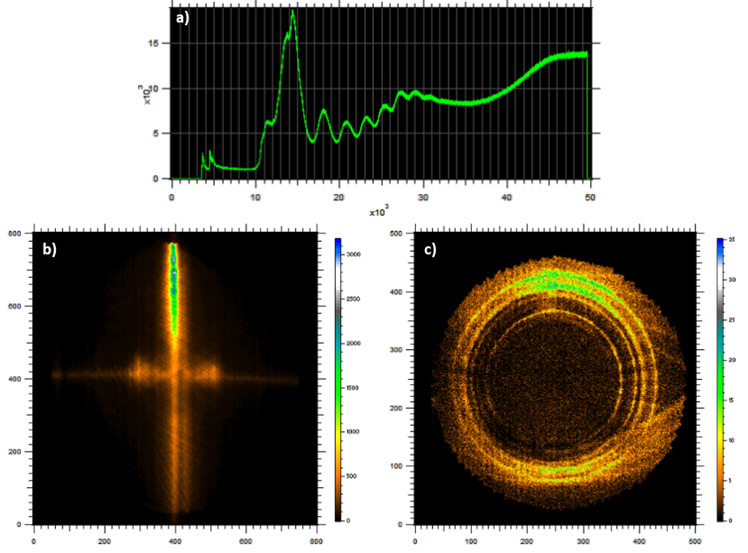 Ms Anna Kristina Schnack-Petersen, Technical University of Denmark
Host Institution: Norwegian University of Science and Technology (NO)
Dates: From 2021-08-30 – to 2021-10-15

Simulations of molecular dynamics is of great importance when attempting to understand reaction mechanism. In order to perform these simulations molecular gradients for both ground and excited states must be available at a sufficiently high level of accuracy in order to offer useful insights into the molecular dynamics. A very popular method for predicting molecular properties is the coupled cluster singles and doubles (CCSD) method, which not only provides results in good agreement with experiments but is also feasible even for larger systems. For this STSM a new implementation of molecular gradients at the CCSD level of theory in the open source program eT has been optimized in order to ensure an efficient implementation feasible even for larger systems. Thus the first step towards molecular dynamics at the CCSD level of theory has been achieved.